Day of the Bread 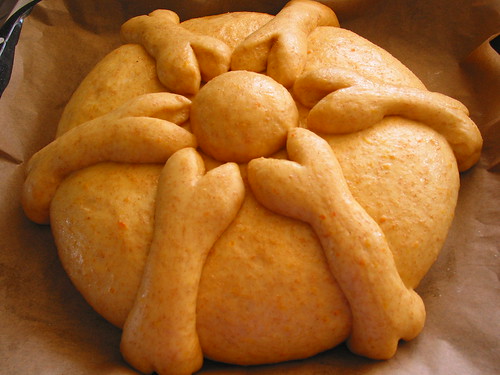 Of course, this “get off my lawn” attitude is a direct result of my kids running off to college. There they are having the kind of Halloween one should have in college, the kind I used to have — no money but lots of ingenuity. We drank whatever was cheap and made costumes with whatever was lying around. I was a toilet-paper mummy. My roommate went as a condom in a wetsuit with a Ziploc bag on her head.

When you’re young, Halloween still has some danger involved. Even if kids know their neighborhood, walking around it in the dark is creepy. Anything could happen. Young adults use the holiday to engage in behaviors that are sketchy at best — because they can get away with it. Meanwhile, I am here, waiting in vain with my bowl of mini candy bars.  My street has a slight incline, which is usually too daunting for trick-or-treaters. The only thing dangerous about my Halloweens now is the likelihood that I will be the one eating this entire bowl of mini candy bars on Nov. 1.

I wish Halloween did impress me. I wish I could get scared. I wish I believed in ghosts, or monsters, or magic, or the walking dead or even evil people. But I don’t. I just wasn’t raised to fear anything other than my own stupidity. But in other parts of the world people not only believe in ghosts, they celebrate them. In Japan, ancestors’ spirits are celebrated at Obon, a holiday sometime in mid-July or August, when your dead relatives are believed to come back for a visit. The Buddhist and Taoist traditions of the Hungry Ghost Festival recognize a monthlong opening of the doors between us and the netherworld. During this time, spirits are said to roam freely — a belief that keeps many families indoors after the sun goes down. In Cambodia, Pchum Ben is one of the most important Khmer holidays. During this two-week period the divide between our world and the world of our ancestors is at its thinnest, allowing them to return and atone for their past sins.

Mexico’s spooky celebration is Dia de los Muertos, which, if you were raised in California, you know very well. This holiday is linked to both pre-Columbian funerary traditions and Catholicism’s remembrance of the departed, Allhallowtide (All Saints’ Eve, All Saints’ Day and All Souls’ Day). As in all of these festivals that honor our departed, there is food involved.

I am a fan of this holiday, even though I am an absolute gringa. I particularly enjoy the dressing of altars or gravesites to honor and remember the dead. The favorite food and drink of the departed, photos, memorabilia and marigolds (the flower of the dead) are laid out to encourage the ghostly souls to visit and hear how they are remembered, and still loved. It’s a nice idea, and Mexico does it so well that in 2008 it was added to UNESCO’s Intangible Cultural Heritage list, keeping company with such other intangibles as the tango, falconry and Kabuki theater.

I hope my kids make this bread for me when I’m an ancestor. I would totally come back for its rich, buttery, spicy crumb. If I become a ghost, I will just come back to eat and hug. I won’t be scary. Much. Maybe a little. In a nice, fun way — like Casper.

-1 to 2 cups all-purpose flour, as needed

1. In a large bowl (or the bowl of a standing mixer) combine milk and yeast. Stir to dissolve, then set aside until bubbly, about 10 minutes.

2. Stir in bread flour (I like to use a fork because it is easier to clean), cinnamon, anise, orange zest and salt. Add eggs one at a time, then brown sugar and softened butter. Slowly begin adding more flour until a soft dough is formed. Turn the dough out onto the counter and knead it for 8 to 10 minutes.  Add more flour as necessary to keep the dough from becoming sticky, but not so much that it is too stiff to knead. (The amount of flour needed will vary with the temperature, humidity, moisture content of butter and eggs, the brand of flour and the accuracy of your measurements; don’t worry about it though — just keep adding as needed). When the dough is smooth and elastic, place it in a bowl, cover with a moist towel and set aside to double in volume — about 1 to 2 hours. (It will rise faster in a warm spot.)

3. When the dough has doubled, turn it out onto your counter and divide it into two unequal pieces, one about twice as large as the other. Roll the large piece into a round, tight ball. Coat a baking sheet with pan spray and place the large round loaf on it, seam–side-down. Whisk together the egg and water into an egg wash, and brush it over the surface of the loaf.

4. Divide the smaller piece of dough into three parts. Roll one into a ball, and fashion that into a skull. With the other two pieces, roll two ropes with knobby ends, for crossbones. Place these on top of the round loaf, then egg–wash them. Dust the whole thing lightly with sugar and set aside to proof (rise for the final time before baking) for 10 minutes. Preheat the oven to 350°.

5. When the loaf is proofed (which means just slightly puffed), bake it for 30 minutes, then rotate the pan and bake another 30 minutes. The loaf should be golden brown all over, with an internal temperature of 210°.  (It is best to check, as large loaves sometimes remain doughy in the middle.) If the loaf is very brown but not done in the middle, turn the heat down to 300°, tent it with foil, and continue to cook as needed.

6. Cool the loaf completely before serving — or taking it to the cemetery. Leftovers make great French toast.